Yuma, Ariz. — In front of an audience of destination marketing professionals representing communities throughout the state of Arizona, the Arizona Office of Tourism (AOT) presented a 2016 Governor's Tourism Award to Yuma's Sanguinetti House Museum and Gardens.

Each year, AOT hosts The Arizona Governor's Conference on Tourism, which includes an Award Gala Dinner. For 2016, the conference was held at the Westin La Paloma in Tucson, with the gala event taking place the evening of Tuesday, July 12.

Following a series of awards presented to various agencies for contributions to tourism in Arizona, AOT Executive Director Debbie Johnson announced the recipient of the award for Arizona Cultural and Historic Preservation.

Citing the work performed to revitalize Yuma's Sanguinetti House Museum and Gardens, the Yuma County Historical Society was called to the stage. Accepting on behalf of the Museum was Bruce Gwynn, Vice President of the Arizona Historical Society's Rio Colorado Division Board of Directors. 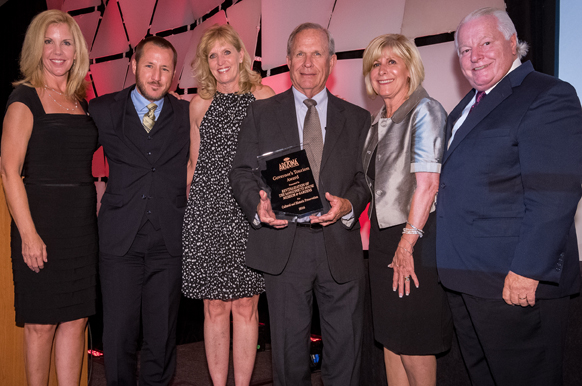 "Revitalizing the Sanguinetti House Museum and gardens brings a variety of Yuma stories to life in a way that the dusty 'period home' incarnation stuffed with historical records never could," reads the official nomination submitted by the Yuma Visitors Bureau (YVB).

This is not the first time Sanguinetti House has received recognition for its positive effects on tourism in Yuma County and the preservation of Arizona history.

On June 23, 2016, the Yuma County Historical Society, which manages the Sanguinetti House, received the Expression of Gratitude in Recognition of Efforts for Tourism (EGRET) Award from YVB.

Currently closed during the summer months, following July's Kids Summer Camp, Sanguinetti House Museum and Gardens will reopen its doors for tours and visitation in October.

Preparations at Sanguinetti House are underway for the unveiling of a new featured exhibit titled SECRETS of Victorian Yuma.